How Much Can You Save On Your Compressor Energy By Simply Reducing The Pressure Band? 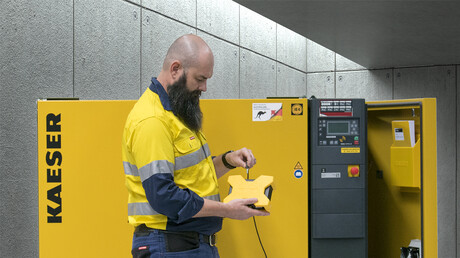 The information from this article draws from data collected by a real-time energy monitoring system on a client’s premises. The audit team was able to identify a couple of issues based on the operation of a 37kW load-unload compressor with an inbuilt dryer. Data collection and analysis was made possible through the use of specialized tools developed for Eenovators Ltd.’s Eagles program.

During routine analysis of operational characteristics of the compressor installed on the client’s premises, the team identified two issues in the machine’s demand curve.

The Audit team recommended an initial adjustment of the lower limit for the pressure band from 6.8 bar to 6.3 bar. This would move the pressure band’s range from 0.5 bar to 1 bar. The team anticipated that this modification would increase the unload time allowing the compressor to unload to a lower demand value during the cycle. The client agreed with this assessment and opted to make this change at the beginning of October 2020 to identify the potential change in operating energy consumption.

As indicated on the image, October saw a consistent drop in energy consumption across the whole month. The Eagles energy management portal was able to identify this drop as well through the monthly report as indicated below.

Still the data shows a reduction in energy consumption of over 1 MWh, whose value stands at a little under $200. Over a year, these savings will approach $2,400 which is quite impressive for a measure that doesn’t need any investment.